I have been participating in discussions with some of the European WeObserve citizen science communities of practice for some time and was asked to provide an update on the Australian bushfires that had occured over the recent fire season and the involvement of ACSA and Australian citizen scientists in the recovery process.  Here is a summary of that presentation and discussion.

The fires in Australia had been something that they had watched in horror but did not truly realise the size. The official losses (3500 homes, 5850 Outbuildings and the tragic loss of 34 lives) had meaning but indicating to people living in the Netherlands that the fires had burnt an area approaching 2.5 x the combined size of Belgium and the Netherlands put it in a context that that really brought it home. 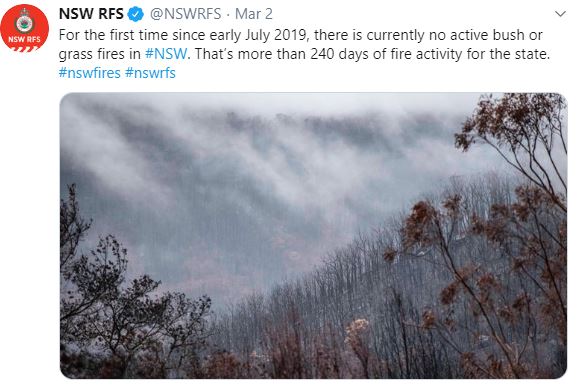 The length of time that the fires had burnt was also something that had not completely dawned on my European audience.

Having set the scene we discussed the setting up of a bushfire working group in mid January and the move to provide support for those citizen scientists wanting to get involved in the recovery process once it was possible.  The work of this group and others saw the establishment of a microsite by SciStarter and the setting up of a bushfire specific view of the ACSA/ALA Project Finder, although the latter was delayed.

There followed a discussion around things that had delayed or impacted the citizen science effort.  This discussion included the impact of the arrival of Coronavirus and the implementation of social distancing measures and travel restrictions, the closure of National Parks and reserves due to the risk of falling trees and branches (noting that many are still closed at the time of writing).

The group appreciated the presentation and noted the apparent relatively low level of funding support for citizen science.

One thought on “Reflections on EU citsci CoP talks”