Skip to content
11Feb 2019 by Michelle Neil No Comments

Did you know that the very first meeting to form ACSA started at the Queensland Museum? On the 10th of May 2014 more than 80 people met to develop this community of practice we now call ACSA. It’s amazing to realise that it has been less than 5 years ago since it all began…

January 24th 2019 was a landmark day for citizen science in Queensland as Minister Leeanne Enoch formally launched the new ACSA-QLD Chapter and announced the Queensland Government’s Citizen Science strategy and grants at the Queensland Museum.

Citizen science groups including Cooloola Coast Care, Qld Health’s Zika Mozzie Seeker, Scenic Rim Wildlife, BirdLife Southern QLD, Brisbane Catchments Network, CoralWatch, Healthy Land and Water, Gold Coast Catchment Association, Griffith Centre for Coastal Management and the City of Gold Coast were invited to set up a stall in the Whale Mall.  Over 200 adults and kids stopped by to try their hand at citizen science activities and to listen to Minister Enoch’s speech about the value of “mobilising Queenslanders to help our scientists with important research projects, because the more eyes and ears you’ve got out there, the better”. 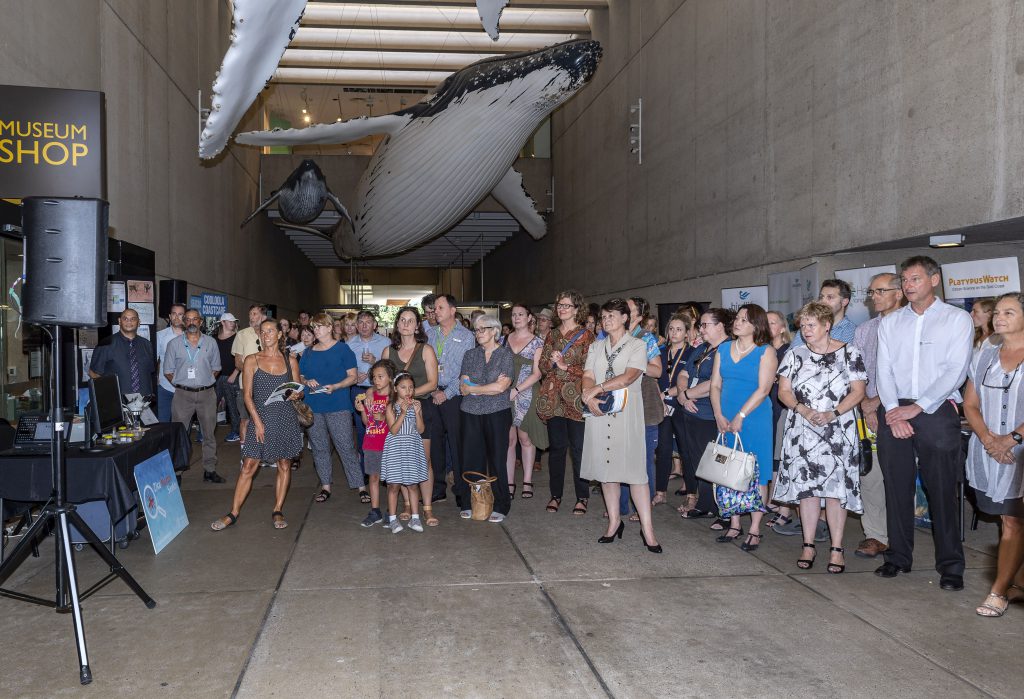 In his first official speech as ACSA-QLD Chair, James Gullison spoke about the new ACSA-QLD Chapter, the Citizen Science strategy and grants before inviting the former Qld Chief Scientist, Dr Christine Williams to be the patron of the ACSA Qld Chapter. You can read James’ speech below.

More information about the Qld Citizen Science strategy and grants can be found here.

So what’s next for ACSA-QLD? After a big deep breath we are now very busy organising a citizen science booth for World Science Festival Brisbane. Come along and see us at Street Science!

“The ACSA-QLD Chapter is excited about the launch of the Queensland Citizen Science Strategy as we believe it will further promote the value of citizen science to the greater community.

It was less than 12 months ago when there was a meeting of the Queensland delegates at the Australian Citizen Science Conference in Adelaide when we were told the Office of the Chief Scientist was supportive of an ACSA-QLD Chapter. From the formation of the committee in June 2018, it’s hard to believe  how quickly the strategy and chapter have progressed in a short time frame.

We could not have achieved so much over the past twelve months without the support of the Office of the Chief Scientist. We would like to thank the former Chief Scientist Dr Christine Williams for her role and ongoing support and formally invite her to be the patron of the ACSA-QLD Chapter.

The location and timing for the launch of the Queensland Citizen Science Strategy could not be more appropriate, particularly during the school holiday period. It is great to see so many excited faces around the venue which demonstrates the passion and enthusiasm that community has for citizen science. Being a father of a 4 year old, it gives me pleasure when I am able to share my passions and work with her due to the excitement she gets when she tells me that she is a ‘scientist’.

Citizen science is inclusive and allows anyone to be able to participate in a variety of projects. It’s what makes it such a rewarding and fulfilling experience because the research is being achieved and people are enjoying themselves in the process. It allows us to go diving with Reef Check and assist on their surveys, waking up on cold mornings and searching for platypus in the Gold Coast hinterland with PlatypusWatch and observing the native birds in our backyards with BirdLife Australia.

Citizen science covers a whole range of science categories and it’s what makes it so appealing – it’s for anyone.”